ChessBase - In Service of Chess 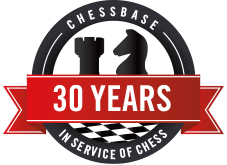 Thirty years ago World Chess Champion Garry Kasparov said: "ChessBase is the greatest development for chess since the invention of the printing press." The company, founded in 1986 by physics student Matthias Wüllenweber, science journalist Frederic Friedel, and chess trainer Gisbert Jacoby, has revolutionized the game. Today ChessBase GmbH, located in Hamburg, Germany, has 30 full-time employees and is the world market leader in its field.

ChessBase is a database software for the game, one that has become the international standard for top players, from the World Champion to ambitious amateurs. The current version, ChessBase 15, gives players over eight million games, and instant access to 200 million position evaluations, generated by the strongest chess engines in the world and stored in the Cloud.

In 2001 ChessBase launched a chess server that allowed chess enthusiasts all over the world to play against each other. Today Playchess is the meeting point for hundreds of thousands of players, from Garry Kasparov to beginners who have just learned the game. The server provides live coverage of all major tournaments, often with grandmaster commentary.

For over twenty years ChessBase.com has been the leading news page for chess, and today provides important services to help chess players better understand the game.

In 2002 ChessBase joined forces with the book publisher Terzio to develop teaching software for very young children. Fritz & Chesster was an enormous success, winning many international awards. It has been translated into 17 languages and is estimated to have generated a million and a half new chess players.

Fritztrainer is another important ChessBase product. The company has produced over 400 training DVDs with videos of top players explaining different aspects of the game, while moving pieces and highlighting moves and squares on an embedded chessboard. Amongst the authors we find former World Champions like Garry Kasparov, Vladimir Kramnik, Vishy Anand, as well as other leading grandmasters and world famous chess trainers. The Fritztrainer has become the premium way to improve your skills in the game.

In short: ChessBase offers you everything you need for the game of chess. As former World Champion Rustam Kasimdzhanov put it: “I don’t know a single chess player, amateur or 2800, that does not use ChessBase, and for good reason.”